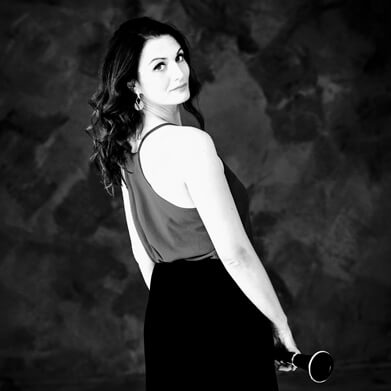 The renowned croatian clarinetist Marija Pavlovic was born in Dubrovnik. Her path took her
beyond the borders of Croatia, and the desire to further her development opened the way to
an international career.
Marija Pavlovic graduated from the Zagreb Music Academy in the class of Milko Pravdic
after which she perfected her art at the Salzburg Mozarteum in the class of Alois Brandhofer.
Additionally, she worked with Walter Boeykens, Ivo Lybeert, Pascal Moraguez and Yehuda
Gilad.
Marija is the recipient of numerous awards that include the annual prize of the Zagreb
Philharmonic Orchestra and PBZ American Express prize for the most successful young
musician of the year (1998); the Würdigenpreis (2002) of the Austrian Ministry for Science
and Culture (Vienna); the 1st prize at the AudiMozart competition in Rovereto, Italy (2006);
the Poulenc Award at the International IBLA Grand Prize Competition in Ragusa, Italy
(2006).
In 2011 she was honored with the “Orlando prize” on the Dubrovnik summer festival for her
solo performance with ‘Gli Archi Scaligeri’, La Scala’s chamber orchestra. Her CD
“music…friendship” with collaborating pianist Martina Filjak received numerous discographic
awards, including Croatia’s ‘Porin’ award for the best album of the year.
In 2018 she recorded with ensemble Focus a CD “Hidden Facts” with masterpieces by
Flemish composers for woodwind quintet.
She has given a number of solo recitals and chamber music concerts at many festivals both
at home and abroad, such as the Art Masters in St. Moritz, Kasseler Musiktage,
Bozarsundays in Brussel, Zomer van Antwerpen, Dubrovnik Summer Festival, Stiftfestival in
Nederland ,The San Marco Festival in Zagreb, The Zagreb Summer Evenings, Rishon
Lezion in Israel, Musique et Nature en Bauges in France, Classic con brio in Osnabrück,
Podium Jonge Musici in Antwerpen, Arbanassi summer music in Bulgaria, Associazione
Filarmonica Rovereto in Italy, Seneffe festival in Belgium, Osor musical evenings…
Her passion is chamber music and she played with artists such as Radovan Vlatkovic,
François-René Duchâble, Gordan Nikolich, Stefan Milenkovich, Monika Leskovar, Enrico
Bronzi, Maria Meerovitch, Tom Owen, Pieter Nuytten, Daniel Rowland, Martina Filjak,
Bostjan Lipovšek, Maja Bogdanovic, Renata Pokupić, Vineta Sareika etc…
She is a member of chamber music ensemble ‘DeBewoners’ in Antwerp.
She has made guest appearances in many European countries, as well as in the USA and in
Israel. As a soloist, she has worked with distinguished orchestras and chambers ensembles
in Croatia and elsewhere like Montreal Chamber Orchestra, Haydn orchestra di Bolzano e
Trento, Brussel Chamber Orchestra, Flanders Symphony Orchestra, Gli Archi Scaligeri,
Dubrovnik Symphony Orchestra, Croatian Chamber Orchestra, Zagreb soloists, Croatian
Radiotelevision Symphony Orchestra, Rijeka Philharmonic Orchestra, Montenegrin
Symphony Orchestra etc…
In 2018 she became “Artist in Residence” in the Dubrovnik Symphony Orchestra and from
2022 the artistic director of chamber music festival “Stradun Classic”.
Marija Pavlović has been practicing Yoga and Pilates for a number of years. She applies the
experience gained from these disciplines to her breathing techniques as a clarinetist and in
her pedagogic work.Since 2021 she has been a teacher at the Royal Conservatoire of
Antwerp.
Marija Pavlovic is Buffet-Crampon artist.