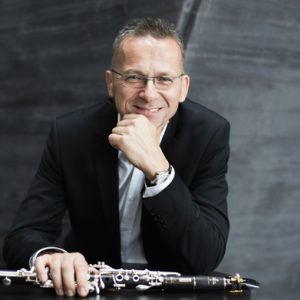 ARKADIUSZ AREK ADAMSKI received his master degree from the Karol Szymanowski Academy of Music in Katowice, in the clarinet class run by Professor A. Janicki. While still a student, he won awards at numerous national and international music competitions, including First Prizes at the National Chamber Music Competition in 1983 (the duo category) and the 2nd Karol Kurpiński International Clarinet Competition (1985).

He has attended international masterclasses in Germany, France and Poland and continued to improve his skills with Professor J. Schou in Denmark thanks to a Polish government grant. In 1985 he began to collaborate with the Silesian Philharmonic Orchestra, two years later becoming a Principal of the Polish Chamber Philharmonic. He now holds the same position in the National Polish Radio Symphony Orchestra in Katowice (since 1993).

He has performed as a soloist and chamber musician with numerous orchestras and ensembles including the National Polish Radio SO, The Hilliard Ensemble, the Polish Chamber Philharmonic, the Warsaw Chamber Opera, the Byelorussia National Philharmonic Orchestra and Sinfonietta Cracovia. He is also a member of The New Art Ensemble He has made many recordings for Polish Radio, Polish Television and the BBC. In 2011, the CD featuring Penderecki’s Clarinet Quartet (recorded by Arek, Arkadiusz Adamski with the Dafô Quartet) received Excellentia & Supersonic Awards from the musical journal ‘Pizzicato’ and was nominated for the International Classical Music Awards (ICMA), the continuation of Midem Classical Awards, in the ‘chamber music’ category. The same nomination he received after recording Penderecki’s Sinfonietta no 2. Together with his outstanding graduates he recorded as a first time in the world phonography Concerto Grosso no 2 for three clarinets and two basethorns composed by K. Penderecki.

Very important on his biography is the album Brahms Calrinet Works recorded with outstanding Polish Chamber musicians including the winner of the ARD Competition Apollon Musagete Quartett. He is the author of the “Rainbow Clarinet School” teaching method for the youngest pupils. In 2007 he was invited as a recitalist to the World Clarinetfest Symposium in Vancouver. Two years later, he performed as a soloist at the Clarinetfest in Porto. As an outstanding teacher he has been giving master classes throughout Europe and his students are among the best clarinetists of the young generation. He has been in charge of the clarinet class at the Music Academy in Katowice since 2001 and Fryderyk Chopin Music University in Warsaw from 2019. From 2010 he is a member of the board of the European Clarinet Association. In 2014 he organized the 4th edition of the European Clarinet Congress in Katowice and served as its Artistic Director. Arkadiusz Arek Adamski plays the clarinet Buffet Crampon – Legende, Licostini LN mouthpiece, D’Addario Reserve Classic reeds and ligature Silverstein CRYO4 GOLD.